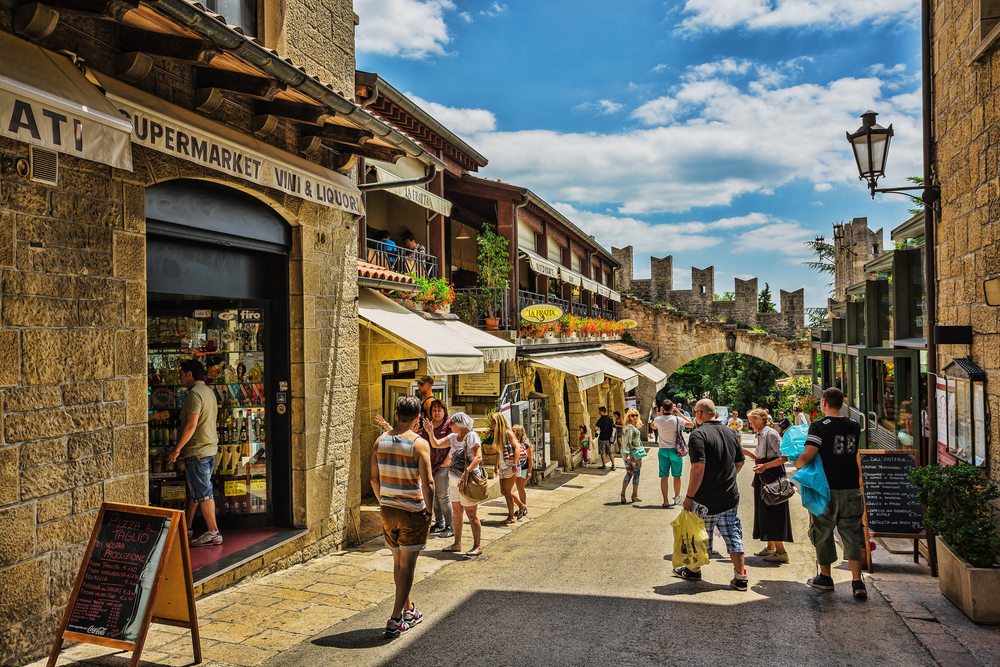 I visited The Most Serene Republic of San Marino (fancy name, right?!) while I stayed in Rimini in the Emilia Romagna region in Italy. San Marino is the oldest republic in the world. And I think it’s probably the prettiest and most dramatic.

I travelled to San Marino by bus, winding up the steep roads that offer increasingly breath-taking views as you ascend towards the top. When I got off the bus the first thing I wanted to do was admire the view. It is simply stunning.

From San Marino you are able to see the Emilia Romagna region sprawl out before you. On a clear day you can see for miles, and I was lucky to visit on a pretty good day for viewing purposes.

As well as the amazing views, San Marino’s streets are great to explore. They’re incredibly clean and full of adorable shops and cute cafes. I was expecting things to be expensive in San Marino but surprisingly they weren’t. The food, drinks and things I looked at in shops were just the same prices as I had encountered in Rimini.

My favourite part of San Marino was without a doubt seeing the largest of the Three Towers of San Marino. Although it’s just a tower Cesta looks pretty much exactly how I’d picture a fairytale castle to look. When I walked down the steps from one tower towards Cesta and was greeted with the view of it framed by the blue sky and the rolling landscape it took my breath away.

When I saw Cesta Tower it looked so much like the tower I imagined Rapunzel was held inside in the fairytale as a child. I almost expected to see her letting down her hair for a handsome saviour to climb up and rescue her. Almost.

San Marino as a whole is a little like a fairytale – it’s a tax haven with only 30,000 residents, there’s extremely little crime and it has one of the highest life expectancy rates in the world. I don’t recall seeing one piece of litter or graffiti during the time I was there. The Guard of the Rock who are the visible force to tourists dress in red and green outfits that make them look a little like characters out of a toy town. It doesn’t seem like a real, functioning state, although that’s exactly what it is. This isn’t a criticism of San Marino, actually it’s quite the opposite. I loved San Marino and the fairytale image it conveys.

The majority of tourists just visit San Marino for the day, like I did, so it’s pretty deserted at night. I’d definitely like to visit again at night when there’s not too many tourists around and get a more realistic feel of this fairytale state.