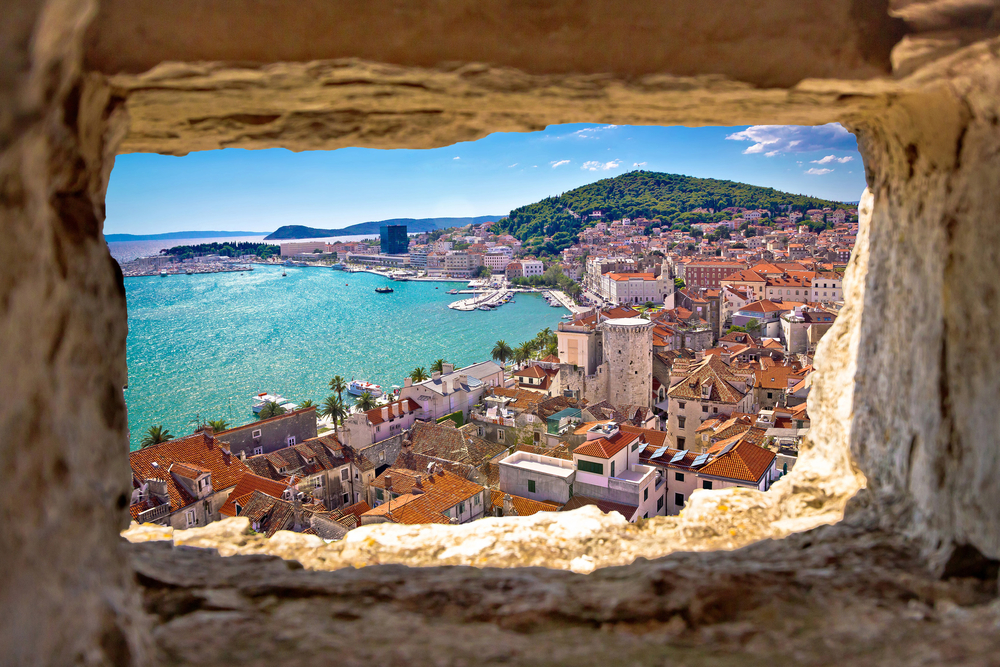 The small stalls inside sold many typically tourist items but if you were willing to look past that there are some smaller works of contemporary art and quirky one-off items to be found.

Leaving the cool of the tunnel behind I found myself standing in front of the Cathedral of Saint Dominus and the bell tower, which serves as one of the main symbols of the city. If you’ve read my article on climbing the Duomo in Florence then you’ll know that I’m partial to walking up hundreds of steps for a panoramic view so, of course, I had to climb the bell tower. A mere €1.50 and 180 steps later in 30 degree heat and this was my reward…

The captivating image of the bright terracotta roofs contrasted against the still turquoise waters of the Adriatic reminded me of Dubrovnik. Although I found it not quite as impressive as Dubrovnik, the view was still beautiful and it gave me a better impression of the size of the city.

One of the things I enjoyed most about the city was simply walking through its ever-changing streets. There are grandiose wide streets which are busy with tourists and locals alike and then there are those quiet, tiny little streets which you’ll often stumble upon in Split. These are always my favourite streets, the ones which really can’t be classed as a street- more as an alleyway or lane. They always offer a moment of peace in a city like Split which is overrun with tourists in the summer months. In these peaceful side streets it was hard to believe Split is home to nearly a quarter of a million people.

Wandering down some of the less populated streets also allowed me to discover some quirky architectural features that I wouldn’t otherwise have seen. I saw arches, clocks, faces carved into the stonework and many more. The whole city has many interesting nooks and crannies just waiting to be found. Plus we came across a pretty incredible ice cream parlour with at least a million different delicious flavours. I’m making myself hungry just writing about it!

Before you leave Split behind, in order to bring good luck you have to be sure to rub the foot of the statue of bishop Gregory of Nin, which stands just outside the northern walls of the Palace.

I think we all need a little bit of extra luck sometimes and I guess that’s why his foot has been so well rubbed! What luck am I hoping for? A return visit to Split, of course! One day simply wasn’t enough to explore the city and now it’s definitely on my list of places I want to return to and spent some more time discovering more of the best things to do in Split.

And maybe I’ll check out some more of that ice cream whilst I’m there…!