During my travels in St. Petersburg, Russia, I was lucky enough to visit some of the most amazing places, including Catherine’s Palace.

The golden turrets of Catherine’s Palace

Catherine’s Palace, an 18th Century imperial residence, is located within Tsar’s Village; around 24km from thecity of St. Petersburg. Tsar’s Village, or Tsarskoye Selo in Russian, was a popular summer residence among the Russian nobility, who enjoyed escaping city life for the peace and tranquillity of the so-called village. It has immaculately maintained gardens and a number of small pavilions within the gardens. There are also many bridges over the river and many of these are in the beautiful Chinoiserie style. 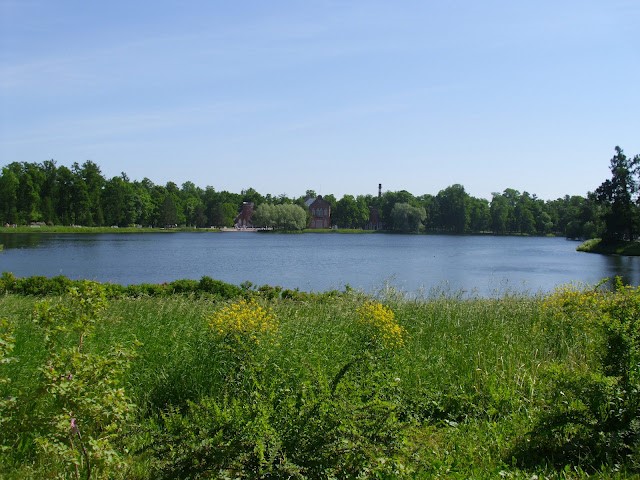 The gardens of Catherine’s Palace

Construction work began on the palace in 1717. It is named after Catherine I, who was the wife of Peter the Great (credited with founding the city of St. Petersburg). The pristine blue and white external façade, with its opulent gold finish, is stunning; especially against a perfect blue-sky backdrop. 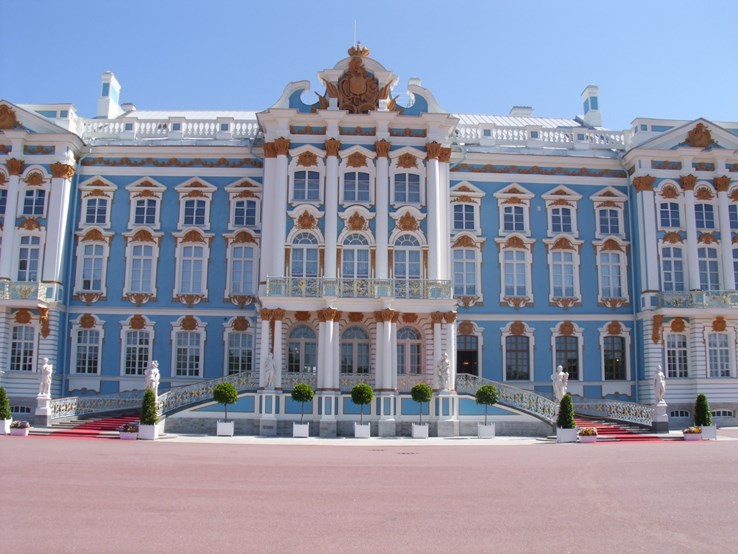 The external decorative features, which you can see above in gold paint, were originally decorated with over 100kg of real gold. It was changed by Catherine II, or Catherine the Great as she is often referred to, when she found out the cost of the gold. She viewed the extensive gold decorations as a reckless extravagance and only allowed some gold finishing to remain.

The interior of Catherine’s Palace is even more lavish than the exterior. The Great Hall and the majority of the rooms have stunning golden façades. Talk Holiday suggests that a tour of the inside of Catherine’s Palace is a must in order to see some amazing artwork, incredibly ornate ceilings and floors, and to generally get a flavour of the flamboyant way of life in which Russian royalty lived.

The only way to discover the interior of Catherine’s Palace, which I highly recommend you do when you travel Russia, then you are required to take a tour. Unless you organise otherwise before arrival, all tours are generally given in Russian so it’s best to contact a tour company before you intend to visit.

If you do decide to take a tour of the interior of the Palace, then you are given some rather fetching blue covers for your shoes to minimise any damage to the intricate wood floors in certain parts of the palace.

Once inside and fitted with your highly attractive shoes covers, you are greeted with awe inspiring and intricate décor which you could easily spend hours admiring.

Also inside Catherine’s Palace is the world famous Amber Room. It is adorned with amber panels which are backed with gold leaf and mirrors. It was created for Peter the Great in the early 18th Century, with pieces from Berlin City Palace. It was then destroyed during World War II when the Germans invaded, after a failed attempt to hide it beneath ordinary wall coverings. It was taken to pieces by the Germans and transported away from St. Petersburg but the whereabouts of the pieces have never been discovered and there are many theories surrounding it.

Under orders from Vladimir Putin, reconstruction of the Amber Room began in 1982 and it was finally re-opened to the public in 2003. There is an extra charge if you wish to visit the Amber Room, which has been called the eighth wonder of the world.

If you are planning to travel Russia, I would highly recommend that you travel to St Petersburg; you wont regret it!