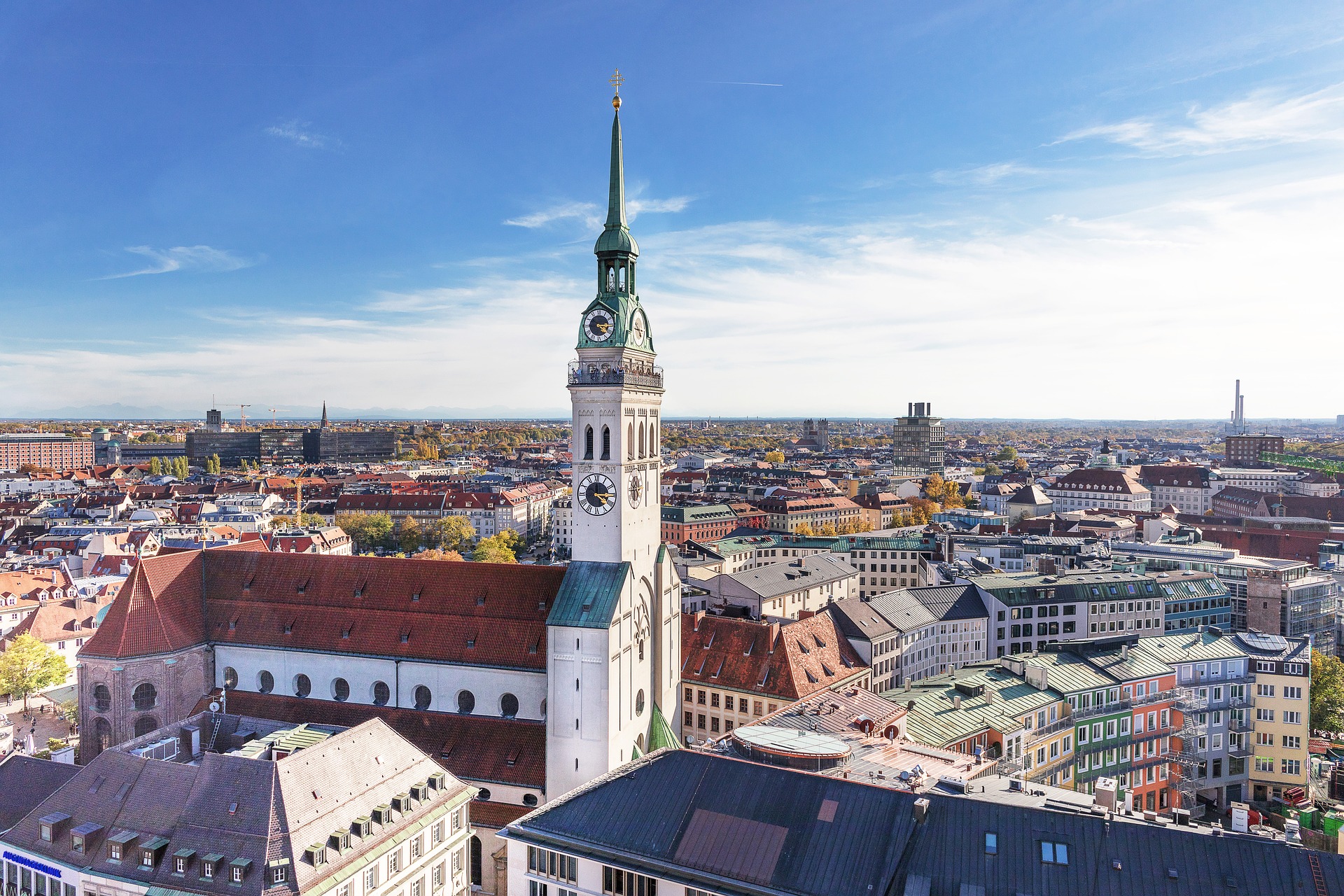 There are some cities that just lend themselves to an autumn or winter setting and Munich is one of them. Don’t get us wrong, it’s equally beautiful in the summer months but there’s something quite magical about the Bavarian landscape towards the end of the year. Gingerbread house style buildings set against a crisp November or December day in the lead up to Christmas just brings out our inner child. It feels like someone has sprinkled pixie dust all over the city as the pre-festive spirit takes over.

Munich lies near the foot of the German Alps and maybe this is why it has a magical, winter wonderland feel to it. It is also Germany’s second most popular destination- Berlin is currently taking the top spot…for now. The Bavarian capital is also rich in history and culture – scenic backdrops, lively bars and restaurants, an impressive arts scene and fairy-tale architecture just crying out to be photographed; it is the perfect city break.

Another good reason to visit at this time of year is to soak up the unique party atmosphere of Oktoberfest the annual beer and folk festival which is held in the city. Spanning over 16 days, Oktoberfest has been known to attract around 6 million people very year. Here you can eat, dance, drink and be merry as you enjoy fairground rides and colourful parades.

Oktoberfest aside, Munich is a real hotspot for lovers of food and drink. All year round, visitors can sample some of Bavaria’s specialities and tasty cuisine. Most of the cafes and restaurants you’ll come across will generally offer traditional fayre and it’s just mouth-watering.

Expect to see local delicacies on the menu such as Bagels with sausages (usually Weisswurst), Schweinshaxe (pork knuckles), Sauerkraut (pickled cabbage –usually served with sausage and potatoes), Pretzels (big hearty ones studded with salt), Bratwurst (delicious sausages made from pork, turkey or beef), Apfelstrudel (beloved German dessert made from sheets of dough filled with chunks of apple). In fact, Munich and all of Bavaria has some of the most wonderful sweetmeats and bakery you could wish for.

Don’t forget to try some traditional Schwartzwalder Kirschtorte (Black Forest Gateau) or Windbeutel which are similar to profiteroles or eclairs that we know and love!

What to See and Do in Munich

As you’ll have noticed, we’ve mentioned beer a few times along the way here and what better way to deepen your knowledge and love for the stuff than to take a tour of one or two of the famous breweries. You don’t have to be a beer fan to enjoy this fun day out it’s fascinating just to learn about the brewing process and chat to the experts. Although it would be a shame not to sample even a small drop during your tour!

Viator have some great prices on Munich attractions and activities that you can book ahead of your trip. One which has proved popular is Munich By Night with dinner at Hofbrauhaus – a lively three floors beer hall where you can sample traditional Bavarian hospitality.

This private guided tour will take in all the city’s famous sights, squares and monuments where you can enjoy seeing them lit up against the night sky. You will then take in dinner and a show at this famous venue before setting off for the Olympia Tower where you will travel to the top for spectacular views of Munich.

Another unmissable excursion during your stay in Munich is a trip to the Royal castles of Neuschwanstein and Hohenschwangau which leave regularly from the city centre.
On this private tour, visitors can take in two spectacular palaces built by King Ludwig II of Bavaria. These fairytale castles are a must – especially if you have any would be princesses in your party.
Neuschwanstein Castle was the inspiration behind Disney’s Sleeping Beauty and draws in over a million visitors every year. Told you there was magic in the air!

Hohenschwangau is also a sight to behold and this was King Ludwig’s childhood home.
Pre-booking this trip allows you to skip the queues too.

Munich is also home to iconic automobile brand, BMW and will certainly appeal to car enthusiasts. Petrol heads will just love the BMW Museum which is at the company’s HQ near Olympic Park. Even if you’re not into cars, there will be some super slick motors to take a selfie with! The museum has a really cool collection of cars and motorbikes on display and you can even get a ‘behind the scenes’ tour of the manufacturing area as well as interactive exhibitions showing the famous brand’s history in design and production.

If you want to tick off all the famous sights of Munich in one go without eating into your free time too much, an ideal way to get around and capture the vibe of a place is to take a bus tour which takes in all the landmarks you’d want to see. This great 1 hour tour passes all the key attractions including the Nymphenburg Palace, Marienplatz, Olympic Park and Odeonsplatz and offers a fun, informative commentary (available in eight languages!) It’s a perfect introduction to the city, especially if it’s your first time. You can also hop on and hop off to suit your schedule and what you want from your day.

Where to Stay in Munich

Now that we’ve made some suggestions on how to fill your time in Munich, you’ll want to know where to rest your weary head. Munich has a great choice of hotels to suit every budget and you can book them all right here on talkholiday too.
Our top Munich hotel picks:

Munich, like many other great European cities is within easy reach these days, thanks to the choice of airlines and tour operators offering value package deals on city breaks. EasyJet have some cracking flight prices with regular services from Edinburgh, London and Manchester. For hotel and flight deals our travel partners have great combinations on sale now.