Christmas Disney Get Much Better Than This

As you’d expect from one of the most magical places on earth, Disneyland® Paris is pulling out all the stops for their glittering festive season. Disney’s Enchanted Christmas runs until 7 January 2018, so there’s still time to book that dream trip for you and the kids.

You could even book now and jet off right after Christmas as a special present to you all. Imagine their faces when you whip that one out from under the tree? Or, you could sack the traditional Christmas at home and just head straight for the magic and stay over for the big day itself. Can you imagine the feelings of nostalgia as you watch your own kids bursting with excitement and anticipation on Christmas Eve? I’d definitely watch the sweetie intake that day!

As this year is the resort’s 25th Anniversary, visitors can expect an even bigger dusting of magic and sparkle. In addition to a giant tree, spectacular shows and parades, Walt Disney Studios® Park will have two brand new shows to beef up the Christmas celebrations. Warm up the vocal chords and expect to sing along to all your favourite Christmas songs with Mickey and co in Sing Me a Merry Christmas, which will play several times a day. Come night-time, you’ll be treated to Goofy’s Incredible Christmas.

Don’t forget to go on over to Disneyland® Park to get that all-important Christmas selfie with all the Disney characters who will be dressed up in their festive finery.

If you really want to be at the heart of everything and embrace the full-on Disney experience, you really should stay at one of the Disneyland® Paris Hotels. Perhaps the most luxurious is the Disneyland® Hotel which offers five-star luxury in a magnificent setting and a short stroll to the gates of the Park but there are options to suit every budget both in official Disney® Hotels and preferred partner hotels.

Disneyland® Paris is located roughly 20 miles from the city of Paris and a short bus ride will transport you to the heart of the action (whichever way you look at it). Whether it’s the magic of Disney you’re after or the dazzling hub of the French capital – it’s possible to have a double whammy on even a short trip. You can happily combine the thrills and spills of Disney with the delights of Paris and all she has to offer. It would be a shame not to tick off some of the key sights of the French capital when you’re so close to it all.

There’s plenty of transport options too so getting there is pretty easy and a choice of efficient services are available. The Magical Shuttle is an airport approved shuttle service that runs from both Charles De Gaulle and Paris Orly airports and will transport you to Disneyland® Paris in under an hour, or visitors can take a TGV train from Charles de Gaulle airport which is super quick and takes around 10-15 minutes.

You can also catch the Disneyland® Paris Express from three convenient locations in the heart of Paris too – Gare du Nord, Opéra and Châtelet. 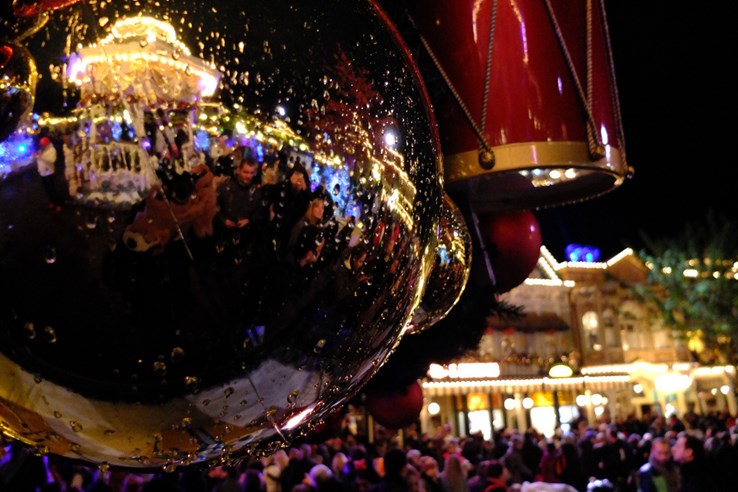 Christmas is such a special time for families, especially ones with young children but you can only imagine the memories that will be made by spending the festive season with all our best-loved Disney characters. It truly is the stuff that dreams are made of.

If Disney’s Enchanted Christmas is on the cards for you this year, don’t forget to come back and share your trip to Disneyland Paris with other travellers on talkholiday.

Travel Tip:
Be sure to download the official app for Disneyland® Paris to plan your days and keep up to date with ride waiting times etc.

*Do check dates and times of all the activities and events over the holidays at Disneyland® Paris before you book.