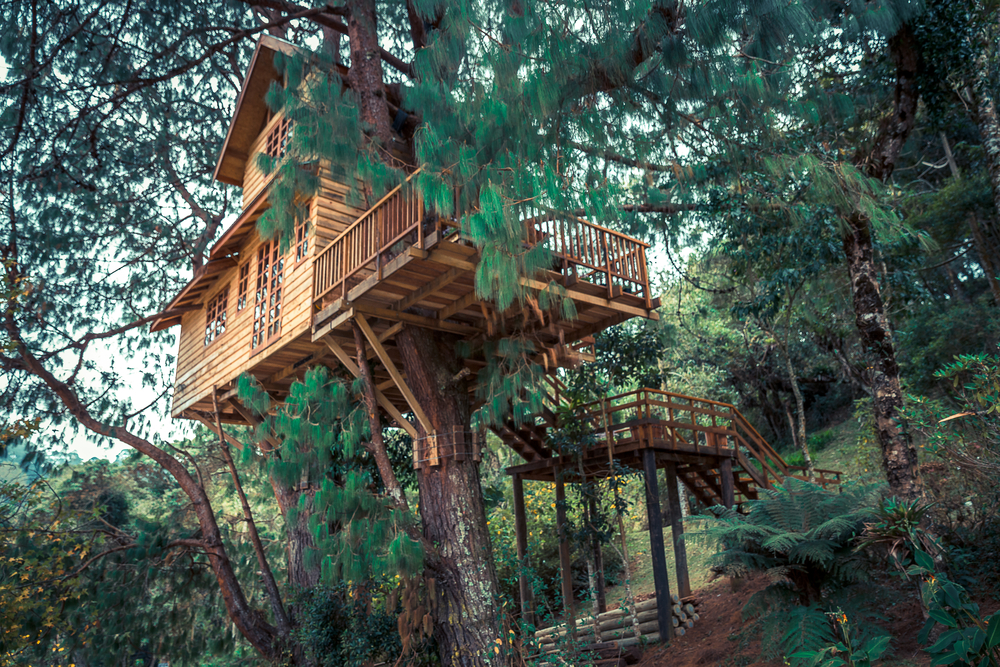 There is something magical about treehouses that brings out the child in every adult. As children we all want to build and play in our very own little tree houses, a leafy sanctuary high up in the canopy. These days, this Swiss Family Robinson dream can be a reality. There is an extensive and varied selection of architecturally astounding treehouses out there, many offering unprecedented standards of luxury living. Here at talkholiday, we’ve whittled it down to our wackiest top four around the globe:

The Birds Nest treehouse – Swedish eccentricity at its best!

Where: Treehotel in Harads, a village in northern Sweden 40 miles south of the Arctic Circle.

Why go: These treehouses represent Scandinavian eccentricity at its very best. Unique designs include The Bird’s Nest, which looks like a big mess of twigs but actually sleeps a family of four, and The Mirrorcube, which is a box covered in mirrored glass and reflects the surrounding trees, sleeping two.The UFO and The Blue Cone are among their other architecturally off-the-wall offerings, and you must have a go in their relaxing Tree Sauna.

Getting there: Scandinavian Airlines flies to Lulea, the nearest city (an hour’s drive away), from London Heathrow, via Stockholm.

Sleep with the trunk of a flowering Royal Poinciana overhead

Why go: This hideaway is in a 400 acre private coffee and spices plantation nestled within the rainforest of Wayanad. It offers 8 rooms and an out-of-this-world luxury treehouse, which sits in the shadows of a spectacular Gul Mohr tree. This 500 square foot treehouse is supported by three trees, and contains all the modern amenities you could wish for. It is built from coffee wood, features a rope bridge, and has the trunk of a flowering Royal Poinciana winding through the bedroom.

Getting there: British Airways do direct flights from London Heathrow to Bangalore. From Bangalore it is a 5 hour drive to Tranquil Resort.

Spend an unforgettable night in Executive Suite 727, which soars out above the lush rainforest of Manuel Antonio National Park

Why go: Executive Suite 727 – this features a restored 1965 vintage Boeing 727 airframe, which has been wedged into the canopy 15 metres up. The interior is decked out in hand carved Indonesian teak, whilst private balconies on each wing afford spectacular views over the Pacific Ocean and the surrounding rainforest. It contains two bedrooms, and is equipped with a flat-screen television and private bathrooms.

Getting there: Iberia offer flights from London Heathrow via Madrid to San Joe’s international airport, which is a mere 2 hour car journey from Hotel Costa Verde.

Where: Sanya Nanshan Treehouse Resort and Beach Club, 40km from Sanya on Hainan Island, the smallest province in China. The island is known as ‘China’s Hawaii’.

Why go: Nestled in a cluster of beautiful old tamarind trees on a magnificent virgin beach, this resort offers three stunning treehouses – The Big Beach in the Sky, The Guanyin View, and The Loft Above the Beach. Each treehouse is just metres away from the azure waters of the South China Sea, and their location beside the new 5000 acre Sanya Nanshan Buddhist and ecological theme park means that you can explore glorious temples, pagodas and exotic botanical gardens on your doorstep. Accommodation is rustic, making this option more suited to the intrepid traveller. There is electricity, but you will have to walk 35 fee to a hot shower.

Getting there: You can fly with Air China direct from London Gatwick to Beijing, from where you can get a connecting flight to Sanya.

Phew! What a choice. I’m personally saving up for a night in Executive Suite 727 in Costa Rica. What’s your favourite? Remember, you can share your tips and photos with other travellers on our tripsology social media platform when we launch on 30th April. If you’ve not already signed up, it is not too late to become a pioneering founding member of the next big thing in social travel – do it here!