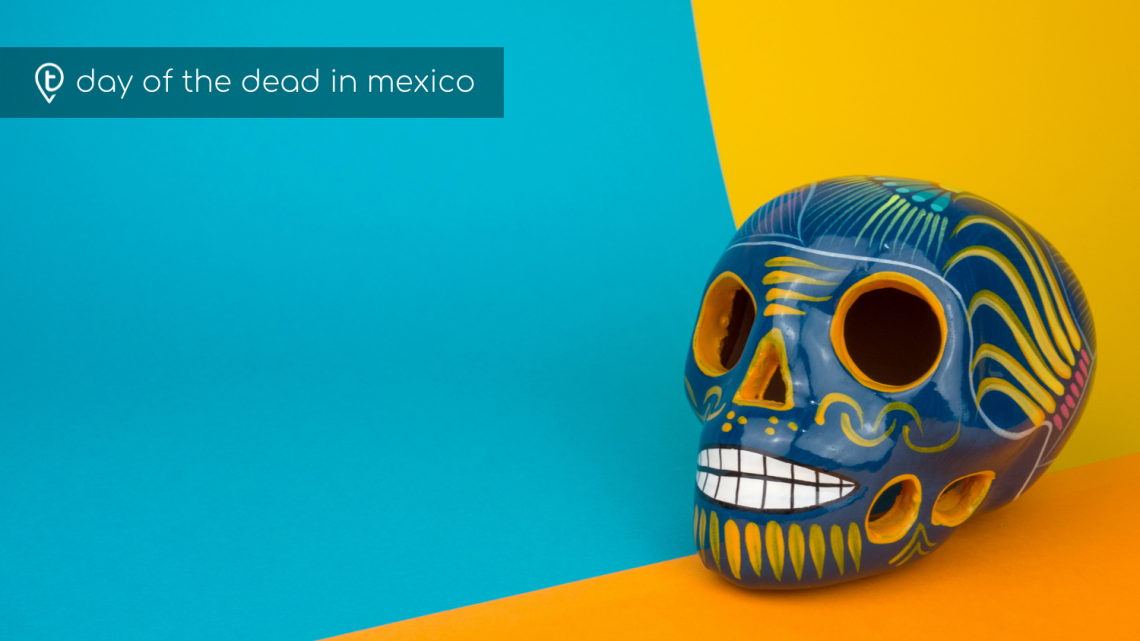 Day of the Dead in Mexico

The end of October and start of November is a busy time for festivities all over the world, the most commercially known is Halloween, comprised of many ancient traditions, one being the pagan Samhain, the Celtic festival when the door to the otherworld is believed to be opened. Then we have the Christian All Hallows’ Eve and All Saint’s Day that Halloween has to lend some credit to for its ghostly characteristics. But the most vibrant and joyous of all, over in Mexico Dia de los Muertos, or Day of the Dead in English, is celebrated on the 2nd of November, and what a contrast to trick or treating!

This time of year might draw your mind to Halloween but Day of the Dead is a completely different festival and one with a slightly brighter vibe! Halloween is celebrated in Mexico but as it’s only a few days prior to Day of the Dead it’s quite often overshadowed by the larger of the two celebrations. The children of Mexico go round the houses shouting “Queremos Halloween!” or “We want Halloween!” But meanwhile, everyone is else is very busy preparing for one of the biggest celebrations of the year!

So, what is Day of the Dead? It depends on where you are. In Mexico City, you’ll experience grand parades and a sensory overload of colour, music, taste and art, whereas if you find yourself in a small town, miles from anywhere, it might be more of a traditional and longer celebration of the festival. But what the indigenous festival of around 3,000 years originates from is a celebration of deceased friends and family members – with a joyful vibe! The main aim is to demonstrate love for the dead by parading, dancing and singing whilst wearing some very funky makeup and costume. Sounds fun for a death festival doesn’t it?

Skulls are at the heart of Day of the Dead – they’re on everyone’s faces and shape the sweets too! You couldn’t have gone to Mexico at this time of year without eating a sugary skull, as gruesome as it might sound, the colours make up for it! One of the main messages of the festival is “Todos somos Calaveras” which means “We are all skeletons”, what a lovely reminder.

The aesthetic of Day of the Dead is probably what led to the festival becoming world-renowned. Everywhere you go you’ll see the most intricate makeup depicting La Catrina covering the faces of the population. Again, it’s a reminder that we are all equal and its history in Mexico is to blur the lines between classes and show that we are all the same. Another of the most eyecatching aspects of the festival is the floats you’ll see across the country – if you’ve seen the James Bond film ‘Spectre’ you’ll know what we mean. These huge floats will hold your gaze and amaze you for hours!

Are you tempted to visit yet? If so, be prepared to be in awe the whole time! Let us know if you’re going or have ever been before!